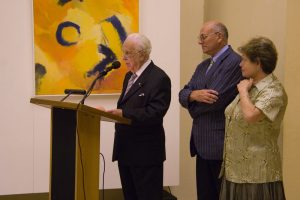 This is not the first time that I have had the pleasure of opening an exhibition of works by Richard Saliba. In fact I have always closely followed his distinguished artistic career, and have opened practically all his numerous art exhibitions over the years. But I must say at once that, of all his exhibitions, I regard the present one as the most important and indeed the most exciting, because it opens new and unbounded horizons.

The last of his art exhibitions took place only a year ago, and it was dedicated exclusively to a genre in which he has truly excelled – landscape. His landscapes have in fact achieved both distinction and distinctiveness because, as we all know, they are indeed so easily recognizable.

Because of the strong visual and intellectual appeal of his landscapes, many have come to regard him as principally a good landscape painter – and that he certainly is – which probably also means that to many the present exhibition comes as a surprise. But, as I shall explain, not so to me.
In presenting Saliba’s last exhibition a year ago I concluded by saying this: “In his pictorial language Saliba combines economy of means with a delicate chromatic sensitivity. The general effect is one of harmonious balance, so pronounced also (and perhaps especially) in his new abstracts, which we can expect to view in another exhibition shortly.” And of course shortly in that context means today and now, when we have the opportunity to admire this remarkable display around us here.

One interesting thing was clearly discernible in Saliba’s last exhibition, and that is that there was a welcome evolutionary process at work. His more recent landscapes were becoming bolder, with richer contrasts, and his pictorial language was becoming more expressively concise and vividly stimulating. Indeed a few of those exhibits could also be described as semi-abstracts.

The path to a purely non-representational art are various. Rarely does an artist go straight to such an art-form. More often the path is through landscape. Both Ernst Wilhelm Nay and Vassily Kandinsky in fact started with landscape, which has also been generally regarded as the most lyrical of art manifestations.

Ladies and gentlemen, when you look round, you will see that what impresses most here is the chromatic element. Colour is laid on with all its richness in a burst of spontaneity. And there is also impact. We are very far here from the idyllic serenity of the landscapes. The viewer is here struck by the expressive force of contrasting colours as well as by the rhythm of the colour structure. These paintings are not the result of a calculated effort but of a deeply felt emotion.
Look at the yellows and blues in the painting on the catalogue cover. It is not just an arranged juxtaposition of pigments; the encounter becomes a dramatic experience.

The artist (and all artists have their own preferences) chose it because it is indeed an excellent painting. But it is not the only one. You will see many of its calibre as you move from room to room. And when you come to the last one at the end, stop for a while in front of the triptych in splendid isolation on one of the walls. It is a remarkable example of the artist’s more recent phase, accompanied by others of the same phase on the other wall on the right – paintings with large masses of colour, enriched by multiple superimposed glazes (the Italian velatura). And, by way of a pleasant contrast, look then at the paintings on the left wall, which belong to an earlier but certainly not less interesting phase. They are different in texture and structure, where the forms are more compact and the rhythm more dynamic.

Here, ladies and gentlemen, we have a remarkable collection, which will certainly find a warm response in the mind and heart of every true art-lover in our country. 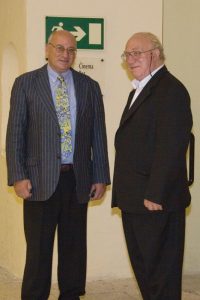 A landscape artist usually spends a lot of time looking at the world around him. Out of the tremendous confusion of persons and things which he sees pullulating about, eventually he finds some kind of a mode, a pattern or maybe even a system which somehow pulls together all of the frightening diversity. He does it through the arrangement of lines and colours and shapes. Somehow it happens that in discovering an order in the outside world, he has the sensation of gaining some degree of freedom in his inner world. Almost inevitably sooner or later he will come to feel that what has been achieved through colours and shapes is much more significant than any kind of material resemblance which the image that he has made has to any set of physical objects to which it may have been originally related. There is much more meaning in the network of inter-relationships between colours and shapes and metaphysics.

When it does happen that an artist instead of presenting images that can be easily characterized as landscapes or still-lifes or portraits or some other conventional genre produces images that are usually called abstract, there will always be some people who will ask what the work is meant to say. But of course if what the artwork said could be put into words, the need for it would no longer be felt. Most people, however, are not indifferent to the ways in which shapes and colours behave towards each other. People’s deep sense of the metaphysical suggestions inherent in complex or at times quite simple configurations of colours and shapes has always been the prime factor in their reactions to landscapes, other people, or objects, but there are clearly greater demands put on their capacity for the collaborative exercise of their imagination if allusions to the normal appearances of people and things are dropped. A more profound inter-subjectivity has to be brought into play for communication to occur in however unavoidably flawed or imperfect a way.

The new phase in the art of Richard Saliba transcends the differences between the three main trends of ‘abstract’ painting. Most obviously it falls squarely within the tradition of so-called ‘lyrical’ abstractions, in which objective representation has yielded place to an ever freer expression of subjective perceptions; however, Saliba goes probably further than even such serenely festive artists as Marc and Delaunay in the lightness of his chromaticism and unhurriedness of his rhythms. In spite of this lack of frenzy in output, ‘abstract expressionism’ is recalled through the images evidently taking shape as projections of inner experience, often to bring a sense of sudden release from the rat race. The achievements of ‘geometrical abstraction’ are assumed in the manifest care and precision with which images are developed without trace of aggressivity or sloppiness. Thus it happens that quality white at one level will blend with red and yellow becoming orangish-pink at another level as if suggesting an inceptive process of reconciliation, a distant anticipation of elusive happiness.

It is almost a century since Kandinsky first conveyed to Schoenberg his initial theory about abstractionism as the rediscovery of spirituality in art and about half a century since it became accessible to my generation in Malta. Yet the new language after so many years of intense life has clearly not yet had its possibilities exhausted and gives scope for artists whose ambition is not to shock to keep finding original harmonies proportionate to their personality. Despite all the noise to the contrary, painting as such is still alive and doing well. 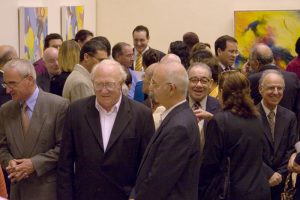 I look upon your best pictures as a moving experience, and ‘moving’ in different senses. The paint does not stay still, both by the power of colour and by the interplay of colour and design. You feel you stand before an invitation to take a psychedelic trip inside the frame, to wander and discover the space inside and around and into and even behind areas, like an adventurous foray into a fragrant jungle of sentiments and moods. The beholder is really on a endless freedom trip into an enormous aesthetic space.